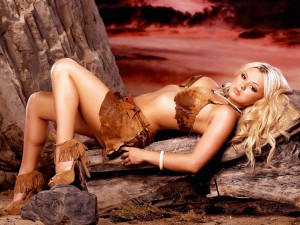 Here’s a little about her that I got from Wikipedia.

Bree Olson was born on October 7, 1986 in Houston, Texas. She’s an American pornographic actress and Penthouse Pet. Olson entered the adult industry in November 2006, and initially worked for a variety of companies including Digital Playground, Elegant Angel and Red Light District Video. She was a contract performer with Adam & Eve from 2007 to 2010. According to Olson she wanted to be a pornstar since she was young, and only waited until she was 20 because she had been in a four-year relationship until then. Olson has performed in over 170 adult movies. She was named Penthouse Pet of the Month for March 2008, and appeared on the cover of Hustler.

Her mother’s parents were Ukrainians who migrated to the United States. She has stated that her biggest hero is her grandmother, who was a concentration camp survivor. In interviews, Olson describes herself as an atheist.